Another rescue plan comes in below the original price tag

Though the tab to taxpayers could still be substantial when all is said and done, it now appears the taxpayer cost of the Troubled Asset Relief Program (TARP) will be substantially lower than was thought not too long ago:

"The Obama administration expects the cost of the Troubled Asset Relief Program to be $200 billion less than projected, helping to reduce the size of the budget deficit, a Treasury Department official said yesterday.

"The administration forecast in August that the TARP would ultimately cost $341 billion, once banks had repaid the government for capital injections and other investments. Congress authorized $700 billion for the program in October 2008."

There is precedent for such good news. Travel back for a moment to the formation and operation of the Resolution Trust Corporation (RTC), the agency formed to purchase and sell the "toxic assets" of failed financial institutions following the savings and loan crisis of the 1980s. As noted in a postmortem by Timothy Curry and Lynn Shibut of the Federal Deposit Insurance Corporation (FDIC), the cost projections for the RTC ballooned in the early days of its operations:

"Reflecting the increased number of failures and costs per failure, the official Treasury and RTC projections of the cost of the RTC resolutions rose from $50 billion in August 1989 to a range of $100 billion to $160 billion at the height of the crisis peak in June 1991..."

In the end, however, the outcome, though higher than the very first projections, came in well below the figures suggested by the worst case scenario:

While people may debate the approaches taken, it is heartening to see evidence that TARP, like the RTC before it, is ultimately costing considerably less than estimated.

By David Altig, senior vice president and research director of the Atlanta Fed

If you are hunkered down on inflation watch, yesterday's news offered some soothing words. From Reuters:

"But [U.S. Treasury Secretary Timothy] Geithner said: 'We have a strong, independent Fed and I am completely confident they have the ability to do their job under the law, which is to keep inflation stable and low over time, and that they will be able to—and certainly intend to—unwind these exceptional measures as soon as they have served their purpose.' "

"He said that there was 'no risk' of the U.S. monetizing its debt, a response to a question about whether the government would seek to finance the national debt by expanding the money supply and thus trigger a rise in inflation."

Concerns about such monetization arose in the wake of the FOMC's decision at its March meeting to purchase up to $300 billion of longer-term Treasury securities and that decision's coincidence with the very large fiscal deficits contemplated in President Obama's budget proposals. Those concerns have accelerated as longer-term Treasury yields have moved higher since.

There will, I trust, be plenty of opportunity to expand on these concerns as things develop, but for now I will offer just a little perspective in the form of the chart below, which shows the recent and (near-term) prospective shares of federal debt held by the Federal Reserve. The red line represents the share of debt that will be held by the Fed at the end of fiscal year 2009 if the $300 billion Treasury purchase program is completed and the federal deficit emerges as currently predicted by the Congressional Budget Office.

The financial crisis has, of course, borne witness to the shift in the Fed's balance sheet from Treasuries (which have been much in demand by the private sector) to a variety of loans and mortgage-backed securities. The consequence has been a sharp fall in the fraction of government debt held by the central bank, a fact that will be little changed under the current trajectory of Fed purchases and projected deficit spending.

A large decline in Fed holdings of Treasury bills—securities that mature in one year or less—drives much of the pattern seen in the chart above. The drop-off in share is not as large for Treasury notes—securities in the two- to ten-year maturity range, and some assumptions have to be made to get a picture of how the Fed's share might evolve over the near term. Without knowing how this evolution will occur, I developed two general assumptions for argument sake. If net new issues of Treasury debt follow historical averages, meaning just over half of net new debt is in the form of notes, and if the central bank applies the remainder of the $300 billion of longer-term Treasury purchases (about $170 billion at the end May) to notes, then the Fed would hold roughly 13 percent of the outstanding stock by the end of the year. If the Treasury were to issue nothing but bills or bonds, a $170 billion purchase of notes by the Fed would bring its share up to the neighborhood of 17 percent. Though these numbers are not as unusually low in historical context as is the case for total outstanding debt, neither would they jump off the page as an extreme aberration in the other direction. 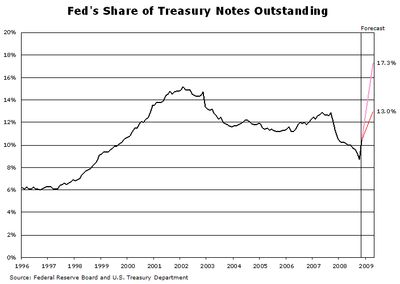 Some might argue that "monetization" these days involves a whole lot more than government debt, but Chairman Bernanke has been pretty clear about his intentions regarding the overall size of the Fed's balance sheet. And, as I see it, so far allegations that extraordinary steps are being taken specifically to accommodate fiscal deficits are properly characterized as risk rather than fact.

There is no accounting for priorities

Just in case you are desperately seeking some refuge from the pervasive blogland commentary on the fiscal stimulus proposal winding through the Senate (which already made its way through the House of Representatives), be forewarned: You won't find it here, but you will find an update to the old adage, There's no accounting for taste (de gustibus non est disputandum), which is to say that when it comes to the fiscal stimulus package, there's no accounting for priorities.

The Senate bill is not yet a done deal, of course, but a couple of clear differences between it and the House bill have emerged. According to the Congressional Budget Office—or CBO, from whom all figures in this post spring—the Senate bill is slightly bigger ($884.5 billion versus $819.5 billion) and would implement the stimulus at a faster pace. The current Senate bill would introduce about 79 percent of the expenditures and tax cuts in 2009 and 2010. The corresponding figure in the plan that came out of the House is 64 percent. 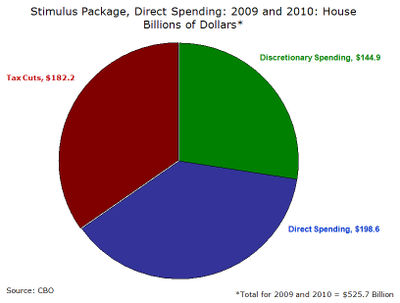 The share of the stimulus devoted to discretionary spending—the place where, for example, infrastructure and education spending reside—is pretty similar in both stimulus plans (about 28 percent in the House version, about 26 percent in the Senate version). What is clearly different is the much greater reliance on tax cuts in the Senate bill, compared with the House bill's emphasis on "direct spending."

In a sense, this distinction is as much an issue of labeling as anything. The majority of the items in this category of direct spending are "provisions that would increase direct spending for unemployment insurance, health care, fiscal relief for states through the Medicaid program, and other programs," according to the CBO. In the language of economists and national income accountants these are "transfer payments," or funds that are transferred to individuals. Formally, they are subsidies for certain types of economic behavior—job seeking and purchasing health care, for example—and hence are really just a negative tax.

There is a certain arbitrariness to the distinction between increases in transfer payments and reductions in tax payments. This arbitrariness is illustrated by a change the CBO made between its initial assessment of the draft House bill and its (largely unchanged) summary of the bill that passed:

"The Congressional Budget Office, in consultation with JCT [Joint Committee on Taxation], has concluded that the subsidy for health insurance assistance for the unemployed should be treated as an increase in outlays rather than a decrease in revenues. Although this treatment is different from that in the table provided in our estimate for H.R. 1 as introduced on January 26, the overall effect on the budget remains the same for each year. JCT has also adjusted its estimates of the mix of revenue losses and outlay increases associated with certain refundable tax credits; that change also has no effect on the budget totals for each year."

Still, if you are likely to be on the receiving end of one of these programs, the distinction is probably not so arbitrary. From this end-user perspective, there is an important economic distinction between approaches taken in the competing plans. So then, which approach to "tax cuts" is better? At this point, I will send you to the aforementioned pervasive blogland commentary. You will find no shortage of opinions.

From the AP (via abcNews.com):

The deficit for the first four months of the current budget year is down sharply from the same period a year ago as the government continues to benefit from record levels of tax collections.

The Treasury Department reported Monday that the deficit for the budget year that began Oct. 1 totals $42.2 billion, down 57.2 percent from the same period a year ago.

From the New York Times:

The United States ran a record trade deficit in 2006 for the fifth consecutive year, the Census Bureau reported Tuesday in an announcement that quickly reignited the dispute between the Bush administration and Democrats over the value of past and future deals lowering trade barriers.

The bureau said that the trade deficit, or gap between what the United States sells abroad and what it imports, reached a new high of $763.3 billion last year, a 6.5 percent increase over the year before. The deficit was fueled by the continuing American need for foreign oil and imports of consumer goods from China and other countries.

The fact that the two deficits are moving in opposite directions is not really anything new:

Twin deficits?  Not so much.