In September, the Federal Reserve Bank of Atlanta's Center for Real Estate Analytics sponsored a conference to examine the impact the real estate downturn is having on public sector finances.

It's no secret that state and local governments are currently experiencing substantial revenue declines. One popular explanation is that deteriorating local real estate conditions are responsible for a portion of that decline, but it turns out that this explanation is not the main cause, at least not yet. One of the sessions in the conference featured attempts by three economists from the Federal Reserve Board of Governors (Lutz, Molloy, and Shan) and two from Florida State University (Doerner and Ihlanfeldt) to estimate the direct impact of the decline in real estate values on local tax revenues. Both papers examined the multiple channels of influence between the decline in real estate values and local revenues.

To illustrate that point, I've pulled a few charts from the Lutz, Molloy, and Shan paper. The first chart illustrates the decline in revenues led by individual and sales taxes. Notably, property tax collections grew at an increasing rate in 2009 over 2008.

The next chart directly depicts the relationship (or the short-run lack thereof) between housing price growth changes and property tax revenue. Lags in changes in assessments and the ability of local governments to change property tax rates can go a long way in explaining why overall property tax revenue continues to grow. 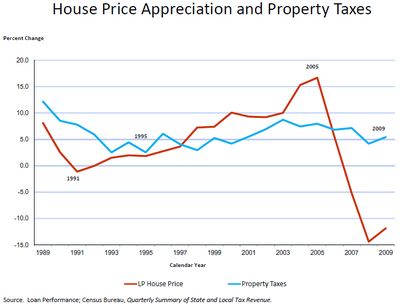 Finally, Lutz, Molloy, and Shan broke down the data by some states, and I include the case of Georgia below. (The Ihlanfeldt and Doerner paper does something similar—and in great detail for the state of Florida.) The Georgia case clearly shows the effect of the lags: property values rose through the first part of the last decade and, even though tax rates were falling, overall tax revenue rose. Post-2007, however, market values of homes declined while the aggregate assessed values continued to rise through 2009 (along with property tax revenue). 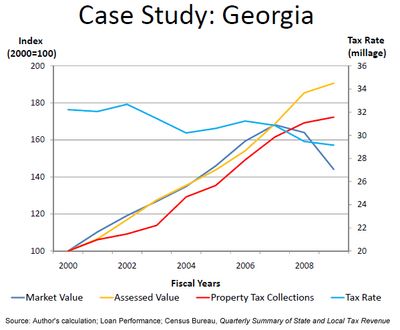 It is hard to imagine the trend of aggregate increased assessed valuation continuing. If the assessed values begin to track the market values, pressures will emerge on the government entities that depend on property taxes. The picture suggests that tax rates and/or spending on programs are likely to change notably during the coming few years.

By Tom Cunningham, vice president and associate director of research and acting director of the Center for Real Estate Analytics at the Federal Reserve Bank of Atlanta