If you try, it isn't too hard to see in this chart a picture of a labor market that is very close to "normalized," excepting a few sectors that are experiencing longer-term structural issues. First, most sectors—that is, most of the bubbles in the chart—lie above the horizontal zero axis, meaning that they are now in positive growth territory for this recovery. Second, most sector bubbles are aligning along the 45-degree line, meaning jobs in these areas are expanding (or in the case of the information sector, contracting) at about the same pace as they were before the "Great Recession." Third, the exceptions are exactly what we would expect—employment in the construction, financial activities, and government sectors continues to fall, and the manufacturing sector (a job-shedder for quite some time) is growing slightly.

For the skeptics, I below offer a familiar chart, which traces the level of total employment pre- and post-December 2009, compared with the average path of pre- and post-recession employment for the previous five downturns: 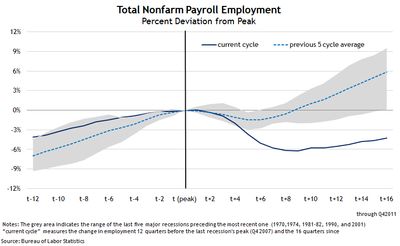 We are now more than 16 quarters past the beginning of the recession that began in the fourth quarter of 2007, and total employment is still 4 percent lower than it was at the beginning of the downturn. In the previous five recessions by the time 16 quarters had passed, employment had increased by about 6 percent. Even in the worst case, indicated by the lower edge of the gray shaded area, employment growth was flat—and that observation is qualified by the fact that the recovery from the 1980 recession was interrupted by the 1981–82 recession.

This unhappy comparison is not driven by the construction, financial activities, and government sectors. In the area of professional and business services, which has logged the largest average monthly employment gains in the current recovery, the number of jobs still sits 2.7 percent below the level at the outset of the last recession, as the chart below shows. 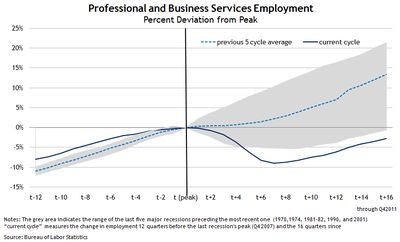 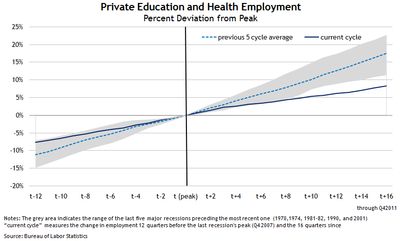 In these charts lies the crux of some very basic disagreements about the appropriate course of policy. The last three graphs draw a clear picture of labor markets that are underperforming by historical standards—a position that I take to be the conventional wisdom. An argument against following that conventional wisdom centers on the question of whether historical standards represent the appropriate yardstick today. In other words, is the correct reference point the level of employment or the pace of improvement in the labor market from a permanently lower level? For the proponents of the latter view, the bubble chart might very well look like a return to normal, despite the fact that employment has not returned to prerecession levels.

One way to adjudicate the debate, in theory, is to rely on the trajectory of inflation. If there remains a significant amount of slack in labor markets, as the conventional interpretation of things suggest, there ought to be consistent downward pressure on prices. The case for consistent downward pressure on prices is not so obvious. Measured inflation appears to moving in the direction of the Federal Open Market Committee's 2 percent long-term objective. 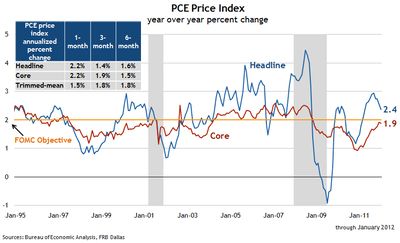 Also, the Atlanta Fed's own monthly survey of business inflation expectations, which surveys a panel of businesses from our Reserve Bank district, indicates that this inflation number (shown in our March release from earlier this week) is in line with what private-sector decision makers anticipate:

"Survey respondents indicated that, on average, they expect unit costs to rise 2.0 percent over the next 12 months. That number is up from 1.9 percent in February and comparable to recent year-ahead inflation forecasts of private economists. Firms also reported that their unit costs had risen 1.8 percent compared to this time last year, which is unchanged from their assessment in February. Inflation uncertainty, as measured by the average respondent's variance, declined from 2.8 percent in February to 2.4 percent in March, the lowest variance since the survey was launched in October 2011."

Does that settle it? Not quite. There may not be much evidence of building disinflationary pressure, but neither is there building evidence of an inflationary push that you would expect to see if the economy were bumping up against capacity constraints. Obviously, the story isn't over yet.

By Dave Altig, senior vice president and research director at the Atlanta Fed