In the last macroblog post we introduced the new version of the nominal Wage Growth Tracker, which allows a look back as far as 1983. We have also produced various cuts of these data comparable to the ones on the Wage Growth Tracker web page to look at the wage dynamics of various types of workers. One of the data cuts compares the median wage growth of people working full-time and part-time jobs. As we have highlighted previously, the median wage growth of part-time workers slowed by significantly more than full-time workers in the wake of the Great Recession. The extended time series allows us to look back farther to see if this phenomenon was truly unique. 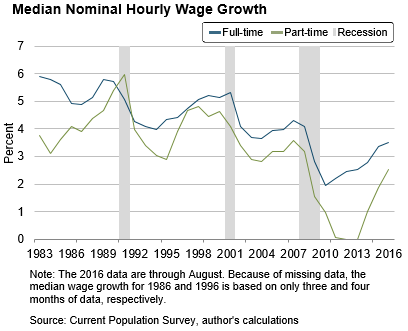 Changes in economic conditions might also be playing a role. The wage growth gap exceeded 2 percentage points in the early 1980s and again between 2011 and 2013, both periods of considerable excess slack in the labor market, as we recently discussed here. In fact, in each of 2011, 2012, and 2013, half of the part-time workers in our dataset experienced no increase in their rate of pay at all.

To explore this possibility further, it's useful to separate part-time workers into those who work part-time because of economic conditions (for example, because of slack work conditions at their employer or their inability to find full-time work) from those who work part-time for noneconomic reasons (for example, because they have family responsibilities or because they are also in school). The following chart shows the median wage growth for full-time, voluntary part-time, and involuntary part-time workers. 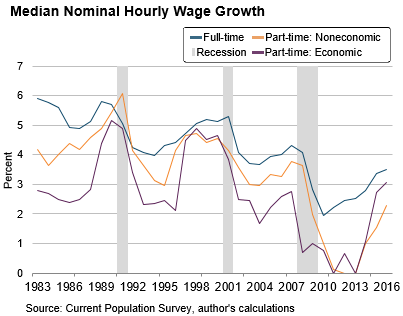 Since 2013, median wage growth for part-time workers has been rising, which is good news for those workers and consistent with the labor market becoming tighter. With the unemployment rate reasonably low, employers might have to worry a bit more about retaining and attracting part-time staff than they did a few years ago.

By John Robertson, a senior policy adviser in the Atlanta Fed's research department

American Firms Foresee a Huge Negative Impact of the Coronavirus

Is There a Taylor Rule for All Seasons?

Is Job Switching on the Decline?

What the Wage Growth of Hourly Workers Is Telling Us