Can Two Wrongs Make a Right?

In a recent macroblog post, I showed that forecasts from the Atlanta Fed's real gross domestic product (GDP) nowcasting model—GDPNow—have been about as accurate a forecast of the U.S. Bureau of Economic Analysis's (BEA) first estimate of real GDP growth as the consensus from the Wall Street Journal Economic Forecasting Survey. Because GDPNow essentially uses a "bean-counting" approach that tallies the forecasts of the various main subcomponents of GDP, the total GDP forecast error can be broken up into the forecast errors coming from each piece of GDP. For most of the subcomponents of GDP, the contribution to total GDP growth is approximately its real growth rate multiplied by its expenditure share of nominal GDP (the exact formulas are in the working paper for GDPNow). The following chart shows the subcomponent contributions to the GDPNow forecast errors since the third quarter of 2011. (I want to note that the forecast errors are based on the final GDPNow forecasts formed before the BEA's first estimates of GDP are released.)

The forecast errors for the subcomponents can sometimes be quite large. For example, for the fourth quarter of 2013, GDPNow underestimated the combined contributions of net exports and inventory investment by nearly 2 percentage points. However, these misses were nearly offset by overestimates of the other contributions to growth (consumption, business and residential fixed investment, and government spending).

The pattern of large but largely offsetting GDP subcomponent errors has been attributed to the work of a fictional "Saint Offset," as former Fed Governor Laurence Meyer noted in a 1998 speech. Unfortunately, "Saint Offset" doesn't always come to the forecaster's aid. For example, in the fourth quarter of 2011, GDPNow predicted 5.2 percent growth—well above the BEA's first estimate of 2.8 percent—and the subcomponent errors were predominantly on the high side.

A closer look at the chart also reveals that GDPNow has had a tendency to overestimate the contribution of business fixed investment to growth and underestimate the growth contribution of inventory investment. Although these subcomponent biases have nearly offset one another on average, we really don't want to have to rely on "Saint Offset." We would like the subcomponent forecasts to be reasonably accurate because the subcomponents of GDP are of interest in their own right.

Have the subcomponent biases been a unique feature of GDPNow forecasts? It appears not. Both the Survey of Professional of Forecasters (SPF), conducted about 11 weeks prior to the first GDP release, and Blue Chip Economic Indicators, conducted as close as three weeks prior to the first release, provide consensus forecasts for some GDP subcomponents. The following table provides an average forecast error (as a measure of bias) and average absolute forecast error (as a measure of accuracy) of the subcomponent growth contributions for the two surveys and comparably timed GDPNow forecasts. 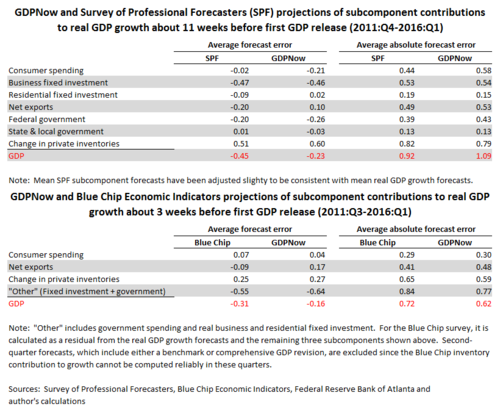 We see that the biases in GDPNow's subcomponents have been fairly similar to those in the two surveys. For example, all three sources have underestimated the average inventory investment contribution to growth by fairly similar magnitudes.

The relative accuracy of GDPNow's subcomponent and overall GDP forecasts has also been similar to the accuracy of the two surveys. "Saint Offset" has helped all three forecasters; the standard errors of the real GDP forecasts are 20 percent to 40 percent lower than they would be if the forecast errors of the subcomponents did not cancel each other out.

Finally, notice that some GDP subcomponents appear to be much more difficult to forecast than others. For instance, the bias and accuracy metrics for consumer spending are smaller than they are for inventory investment. This differential is not really that surprising, because more monthly source data are available prior to the first GDP release for consumer spending than for inventory investment.

Can we take any comfort in knowing that private forecasters have mirrored the biases in GDPNow's subcomponent forecasts? An optimistic interpretation is that the string of one-sided misses are the result of bad luck—an atypical sequence of shocks that neither GDPNow nor private forecasters could account for. A more troubling interpretation is that there have been structural changes in the economy that neither GDPNow nor the consensus of private forecasters have identified. Irrespective of the reason, though, optimal forecasts should be unbiased. If biases in some of the subcomponents continue, then forecasters will need to look for a robust way to eliminate them.

By Pat Higgins, an associate policy adviser in the Atlanta Fed's research department