The unemployment rate is close to what most economists think is the level consistent with full employment over the longer run. According to the Federal Open Market Committee's latest Summary of Economic Projections, the unemployment rate is currently only 15 basis points above the natural rate. Yet, average hourly earnings (AHE) for production and nonsupervisory workers in the private sector increased a paltry 2.3 percent in March from a year earlier (as did the AHE of all private workers), and is barely above its average course of 2.1 percent since 2009.

In contrast, the Atlanta Fed's Wage Growth Tracker (WGT) suggests that wage growth has been increasing. The February WGT reading was 3.2 percent (the March data will be available later in April), considerably higher than its post-2009 average of 2.3 percent. 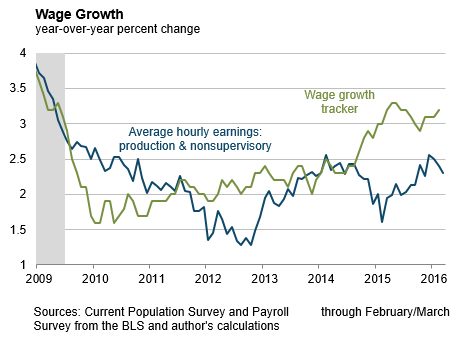 Why is there such a large difference between these measures of wage growth? Besides differences in data sources, the primary reason is that they measure fundamentally different things. The WGT is an estimate of the wage growth of continuously employed workers—the same worker's wage is measured in the current month and a year earlier.

In contrast, the AHE measure is an estimate of the change in the typical wage of everyone employed this month relative to everyone employed a year earlier. Most of these workers are continuously employed, but some of those employed in the current month were not employed the prior year, and vice versa. These changes in the composition of employment can have a significant effect.

A recent study by Mary C. Daly, Bart Hobijn, and Benjamin Pyle at the San Francisco Fed shows that while growth in wages tends to be pushed higher by the wage gains of continuously employed workers, the net effect of entry and exit into employment tends to put a drag on the growth in wages. Moreover, the magnitude of the entry/exit drag can be relatively large, varies over time, and differs by the type of entry and exit.

For example, older workers who have retired and left the workforce tend to come from the higher end of the wage distribution, and their absence from the current period wage pool exerts downward pressure on the typical wage. The greater number of baby boomers starting to retire is having an even larger depressing effect on growth in wages than in the past. Because the WGT looks only at continuously employed workers, it is not influenced by these net entry/exit effects.

To the extent that firms adjust the pay for incumbent workers in response to labor market pressures to attract and retain workers, the WGT should reasonably capture changes in the tightness of the labor market.

Economists at the Conference Board modeled the relationship between different wage growth series and measures of labor market slack. One of the slack measures they use is the unemployment gap—the difference between an estimate of the natural rate of unemployment and the actual unemployment rate.

To illustrate their findings, the following chart shows the WGT and AHE measures along with the unemployment gap lagged six months (using the Congressional Budget Office estimate of the natural rate). 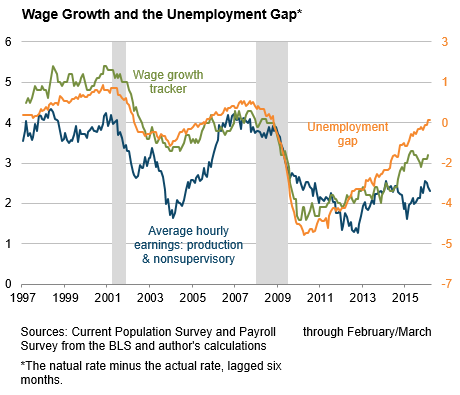 In contrast, the correlation with the wage growth tracker is higher at 0.93. Moreover, the unemployment gap-AHE relationship appears to be particularly weak since the Great Recession. The correlation since 2009 falls to just 0.08 for the AHE, whereas the WGT correlation is still 0.93.

Our colleagues at the San Francisco Fed concluded their analysis of the effect of flows into and out of the employment on wage growth by suggesting that:

"... wage growth measures that focus on the continuously full-time employed are likely to do a better job of gauging labor market strength, since they are constructed to more clearly capture the wage dynamics associated with improving labor market conditions. The Federal Reserve Bank of Atlanta's Wage Growth Tracker is an example."

That assessment is consistent with the Conference Board study, and suggests that labor markets may be tighter than is commonly believed based on sluggish growth in measures of average wages such as AHE.

By John Robertson, a senior policy adviser in the Atlanta Fed's research department, and